A downloadable game for Windows

Plan B is a simultaneous turn-based tactics game, where you make a plan for your team of agents, and watch it play out in real time.

This is a prototype version of the game. Feedback welcome and if you encounter any bugs, let me know

Woah, it's back! Does that mean anything?

Thanks for playing! I noticed you came across a bug on one of the levels, it should be fixed in the new version I just uploaded!

dude, yes! this is awesome! I mean, I'm only in the second mission of the tutorial, and I have to go to bed, but I'm already having fun :)

I'm a unity dev as well (not especially good one, but still), capable of doing something of sound, graphics, design, programming, a bit of everything, basically. so if you plan (and YOU SHOULD, the market/niche for this one is already opened by Gunpoint and Doorkickers as mentioned, but still very empty) to do more with this than just a prototype (i can even imagine this as a mobile game, mechanically full-fledged strategy of this original kind with none of the mobile "design" bullshit, imagine how awesome that would be!) and you'd be interested in not doing this alone, I'd be very happy to help, just let me know! ;)

oh, "i can even imagine this as a mobile game"... that was not meant in any bad way, i meant "full-fledged PC game but a mobile one as well, even though you probably didn't think of that", nothing else). i also have experiences dealing with app stores, marketing companies, getting in touch with review sites, making crowdfunding campaigns, etc... not much, because my own creation wasn't too worthy of being pushed properly, but this thing is, so the entry-level experience might be useful when trying to push this as hard as I can.

(why the fuck do I care this much? i have loads of ideas i know are good and worthy (my itch.io profile doesn't contain or even mention them), which I always had and still have trouble even realizing because i have trouble finding people who would help. you have not only an idea, but an awesome already (at least half-)done thing which you don't seem to realize how awesome and potentially successful it is.  i know how atrocious and depressing and demotivating it can be to have nobody believe in you enough to help you in any way, so I have the need to help prevent this experience for someone in cases where I see the thing is definitely worth it. thus i have the feels and wants and needs to help someone who's not even in this situation yet, to avoid it. that's why. so: programming? sound design? polishing? debugging? sound design? level design? crowdfunding? marketing? i would be happy (capability would show in the process) to help with anything. really. just contact me. i'm going to play more of it now, despite the fact I was originally planning to work on my own design some more :-D )

p.s. (at least) in the first level, repeatedly quickly pressing backspace to delete crashed the game for me. no error, no windows report window, just hard quit/disappearance. might have been because there were no more waypoints to delete, not sure, not willing to try and replicate it, i'd much rather play more of it properly O:-)

Thanks for the enthusiastic response! I'm glad you're liking the prototype so much, and your feedback is very motivating. There's still a lot to do design wise with this thing, so I'll keep iterating on the ideas for a while longer before I decide if I want to move it past the prototype phase

also yeah, I already made a hysterically enthusiastic post about this on cgn.us, some new gaming social network that I'm not sure how populated it is (but whatever), to hopefully peer pressure you into pursuing this, but I'm telling you so you're not surprised if you suddenly get unexpected amount of attention and comments (which I hope you do). ;)

No, this is not an ad for their site. This is an info that I made an ad for you on their site :-D

Downloading, from the description and screenshots it looks like an idea i've been playing around some years ago, gave it working title "MatrixMoves" back then :-D

Honestly the best game I've found so far on itch.io . Like a cross between Gunpoint and DoorKickers.  I'd love to see more levels and more difficulty, and would happily pay $5 for it once it's finished :)

Thanks! Glad you liked it 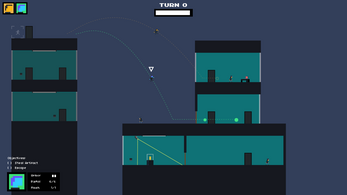 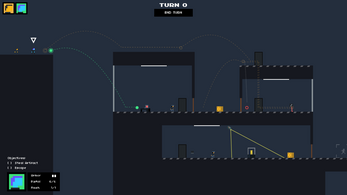